PAY ATTENTION: Legit.ng is on a mission to support vulnerable children of Calabar – join the initiative on Patreon, let’s change more lives together

A secondary school in Owode Yewa, Ogun state, Al-Minhaaj Model College, has stirred massive reactions on social media after posting photos of their students writing their mock exams outside the classroom.

The college said it did that as a way to foster self-reliance, noting that it’s a sure way to bring about a rebirth in the country’s education sector.

It called on parents and stakeholders to frown against anything that engenders low performance and be committed to meritocracy. 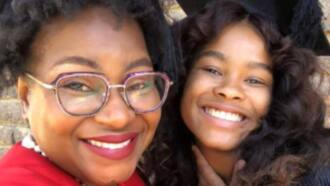 Isn’t this an extreme measure?

Mixed reactions trailed the photos as some people pointed out that putting the kids outside, making them susceptible to the elements is an extreme measure to take.

“This reminds me of our waec examination in secondary school..which is over 10 Years ago….. The spacing was very much. No room for woos wobi…. CTY sha.”

“This is good. They need to be independent. Pray they all come out in flying colours. To the management, May Allah crown your effort with their success.”

“But being under the sun isn’t too good.”

“They can still do it in the classroom with maximum spacing. If rain accidentally fall nko?”

“Arrant nonsense! There’s a better way to curb examination cheating. Print the questions on different colors of paper and spread them in the classroom.” “How can pupils be wriiting exams in an open place.It shows that we didn’t value our children.(pupils).A beg which social distance are you observing.let learn to value life Nigeran.hmnmnn”

Meanwhile Legit.ng earlier reported that Olumuyiwa Igbalajobi had to take the compulsory West African Examination Council examination a 10th time before he had a successful outing.

He said he has now travelled to Korea, Germany and Canada, all within 8 years.

The graduate from the University of Ado Ekiti, Ekiti achieved all that thanks to educational scholarships he secured that covered his flight trips and tuition fees and his never-give-up attitude to life.

Olumuyiwa who currently is a Research fellow at MSL, University of British Columbia, Canada challenged his followers not to give as their dreams are still valid.