For extra-judicial killings linked to officers of the police and the Nigerian Army, the forces in Bayelsa have been asked to pay the sum of N21 billion to victims.

The verdict was given on Thursday, July 8, by the state’s judicial panel of inquiry on police brutality and other related offences.

Justice Young Ogola, the chairman of the panel, said recommendations were made after established findings from reports and petitions, Punch reports.

Ogola noted that about 11 police officers were recommended for prosecution, one for dismissal, and four for demotion.

He added that the sum was awarded in damages out of the 40 cases fully determined and that it included compensation to communities razed down by Nigerian soldiers.

Receiving the reports, Governor Duoye Diri thank the panel for its thorough investigations, adding that the state government will do its utmost to implement the recommendations.

Although the governor said paying the sum is something to be looked into, he reminded security agencies that they must carry out their duties only within the confines of the law. 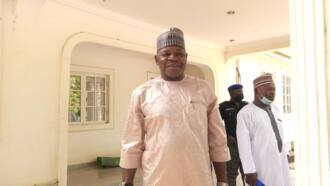 “The issues you have raised will be looked into. The N21 billion awarded is appropriate, but for the security agencies to pay is another thing.

“We will within the limits of available resources and procedures see how these victims will get reprieves.

“While the law enforcement agencies have every day to protect lives and property, they also have a duty to do that within the confines of responsibility and protection of human rights of all citizens.