A scroll through the official Instagram page of Wizkid’s third son Zion shows that he is often called a tough boy.

The name seems to suit the little boy as he recently displayed it in some photos that were shared online. 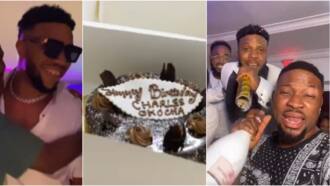 In one of the photos shared, Zion’s hands were in his pockets as he squeezed his face like he was irritated by something.

While his face was straightened in the second photo, the young boy also was not smiling.

As expected, Nigerians had something to say about the little boy’s facial expression.

“No be the boy way them born yesterday be that?”

Legit.ng earlier reported that the little boy showed off his DJ skills in a cute video.

The three-year-old was caught on film playing with a piece of sound equipment, with headphones on.

Zion was seen on the bed with the music mixer playing a song much to the amusement of the two ladies with him. The little boy looked so serious as he concentrated on what he was doing.