Comedian Bovi and his wife Kris are not top mentions when it comes to celebrity couples who enjoy the public display of affection.

However, an interesting video of the two has caught the attention of their fans and followers in the online community.

Bovi and his woman, Kris, were among those who attended actor Richard Mofe Damijo’s star-studded60th birthday party in Lagos.

The video making the rounds captured the couple taking out time to have fun on the dance floor.

In the short clip, Bovi’s wife was spotted wiggling and grinding her backside against her husband who was also doing his thing at the back.

Guests and other colleagues who witnessed the cute moment couldn’t help but film the couple on their mobile devices. The husband and wife also made sure to give a good show.

Some months ago, Legit.ng reported that the Bovi his wife, Kris Asimonye, took to social media to celebrate their union.

The couple celebrated their 11th wedding anniversary on September 19, 2020. To mark the big day, lovely family photos were shared on the couple’s individual social media pages, accompanied with sweet captions. 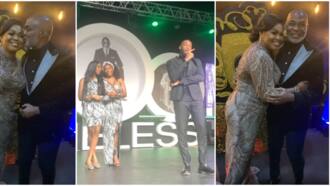 Fans, colleagues celebrate with Bovi and his wife

Fans and colleagues also joined the husband and wife in celebrating their wedding anniversary.

“Happy anniversary to you and your family.”

“This is so beautiful.”