A house cleaner got a huge surprise from her boss that she will not forget probably for as long she exists on earth.

The househelp was gifted a new house by her kindhearted boss.

Cara Simmons, according to Goal Cast, resides in Cleveland, US where she cleans homes passionately without minding the toll it had on her health. 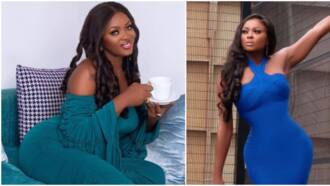 BBNaija star Ka3na shuns detractors, proceeds to beg fans for gifts ahead of her 27th birthday

The hardworking single mother of three, in a well planned surprise managed by an organization named Prank It Forward, was directed to go clean a different house.

In a video shared by Daily Mail, while in the house another lady who was part of the whole surprise set-up told Cara that there was no cleaning needed to be done.

instead, Cara was treated to different meal courses and tried out new wears.

To Cara shock, the keys to the apartment was handed to her.

Cara’s boss named Mary Jo described the cleaner as one that gives her all to her job.

“She gives her all to her work and her family.”

Cara would also be going on an all-expense paid trip to a city in Mexico along with her sister named Glo Nicholson. Weeks after lady rejected man’s marriage proposal, he does the ‘unbelievable’, buys her new Honda car

Meanwhile, Legit.ng previously reported that a Nigerian lady had thrown a surprise birthday party for her maid.

In the video which was shared by the company that handled the surprise, The Surprise Factory, they showed the moment the help realised her bosses had planned something for her big day.

It was disclosed in the video that the madam of the house sent the help on a quick errand to enable them set up their surprise. When she returned, a trumpeter started to play a birthday tune and then she realised what was happening.

The birthday girl shrieked and jumped around in excitement. In no time, she was presented with a birthday cake decorated with sparklers and also sprayed with confetti.