Controversial Nollywood actor Uche Maduagwu has got Nigerians talking on social media after he took a swipe at Davido yet again.

This time, he addressed the reason the singer did not bag a Grammy award like his colleagues, Wizkid and Burna Boy.

Taking to his Instagram page, the actor disclosed that the singer sold his Grammy award birthright for a marriage with ex-fiancee, Chioma which never happened. He is all about women and I deal with real life situations, Burna Boy talks about competition with Wizkid

He went on to tell other men to take Davido’s situation as a lesson, and not promise a good woman marriage and end up disappointing her.

“Davido don sell his Grammy award birthright for a plate of audio marriage assurance to Chioma. Let this be a big lesson to all men, don’t promise a good woman marriage and if you are going to disappoint her.”

A lot of people already know the actor for his constant jabs at Davido, and they did not hesitate to put him in his place.

Read some comments below:

“Even her brother will not exercise the heart break like you ohhhh. marriage na by force? If it’s not working, is not working, life continues.” 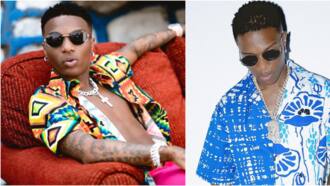 My girl has to buy me a ring and propose on both knees: Wizkid tells his future partner

“You just want to gain attention from him.”

“What exactly is this she man problem?”

“@uchemaduagwu for you to know that you’re completely irrelevant and useless, none of the celebrities you always call out have replied or said anything.Keep on fooling yourself.”

Uche Maduagwu got Nigerians talking on social media after he addressed the issue of the singer’s luxury car.

The actor stated that if Davido was the real owner of the Rolls Royce he posted online, he would have fully spelt out the name of the car.

According to him, Davido’s dad bought two brand new cars and the singer posted one of them as his own.