A heartwarming video has emerged on social media in which a Nigerian mum could be seen rolling on the floor when her daughter arrived home after ten years in the United States.

In the video that was shared on Instagram by @instablog9ja, the mother kept screaming excitedly while rolling on the floor for finally seeing her US-based daughter again. The daughter came back home with her child, a little girl who was only smiling when she was taken to grandma.

Who is the US-based daughter?

Legit.ng couldn’t confirm the identity of the woman that recently arrived from the United States as @instablog9ja didn’t share more information about her.

Many are in love with the video

“Make everybody try de comot house jare. Even if na Lagos you come… Still comot. Make them miss you small.”

“Wow this was the same reaction i got from my mum after I recently got back from Cotonou.”

“Nothing like mother’s love. I can feel her joy.”

“This got me emotional.”

“Wow. God bless all our mothers.” 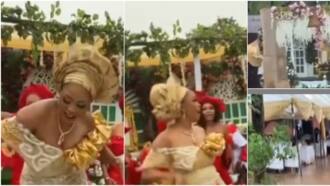 Legit.ng previously reported that a Nigerian man with the Instagram handle @obynodaddymuna put smiles on his parents’ faces after returning home from the United States.

@obynodaddymuna had planned with his siblings that he would be surprising their parents with his visit, and when he did his mother was all emotional.

In a video the young man shared on his Instagram page, his mum could be seen jubilating upon her son’s arrival.