Traditional rulers in the southwest, Kogi and Kwara states have called for the immediate release of the aides of the Yoruba activist, Mr Sunday Adeyemo (aka Sunday Igboho), who were arrested by operatives of the Department of State Services during a raid on his Ibadan residence.

The monarchs, under the aegis of Forum of the Yoruba Obas, also demanded compensation for the families of those killed during the raid.

The DSS had on July 1 raided Igboho’s residence in Ibadan, Oyo State, arrested 13 of his aides, and killed two others. 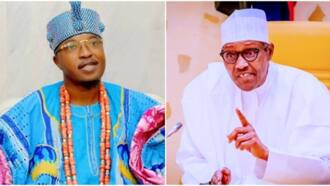 While parading 12 of the activist’s followers, the security agency had said it acted on an intelligence report, adding that seven AK-47 assault rifles, three pump-action guns, three charm jackets/traditional body armour, among other items, were recovered.

The incident happened hours before a rally by Yoruba Nation agitators in Ojota, Lagos.

But the traditional rulers in a statement titled, ‘The Position of the Forum of Yoruba Obas on the Recent Invasion of Sunday Adeyemo’s House by the Operatives of the DSS and the State of the Nation,’ described the invasion of Igboho’s home and killing of his aides as an infringement of their fundamental human rights.

The statement was signed by the President of the forum and Molokun of Atijere Kingdom, Ondo State, Oba Samuel Adeoye (Edema I); its General Secretary, Dr Abdulrasaq Abioye, Olukotun of Ikotun Ile, Kwara State; and 17 others.

The monarchs said, “As traditional rulers, we cannot bury our heads in the sand like an ostrich on a very sensitive issue like this which, if not well-managed, could further polarise the oneness and unity of Nigeria, considering the recent calls by prominent people in and outside the shores of Nigeria for the disintegration of Nigeria as one indissoluble and indivisible entity. We strongly condemn in its entirety the invasion and the gruesome murder of the people at Sunday Igboho’s house on July 1, 2021.

“We believe the killing by the officers of the DSS is unwarranted and unjustifiable, a violent breach of the fundamental right of those who were killed by the overzealous officers in Sunday Adeyemo’s house. We hereby call for the immediate release of those arrested at his residence. We demand that there must be an adequate compensation for the family of those people who were murdered during the operation.”

“We equally, in the same vein, call on President Muhammadu Buhari to cause a discrete and holistic investigation into this volatile issue. While we as custodians of tradition and advocates of peace will not shield or encourage anyone to break the law of the land, we make bold to state that the Constitution of the Federal Republic of Nigeria is very clear and unambiguous that the governor of the state is the chief security officer of the state and as such, His Excellency, Governor Seyi Makinde, ought to be apprised of any move to cause the arrest of anyone in Oyo State who has or is likely to cause serious security breach before such a person or group of persons can be arrested,” they added.

On the state of the nation, the monarchs lamented that insecurity in Nigeria had reached an alarming crescendo that triggered a great concern for traditional rulers and other Nigerians, adding that with every state in Nigeria grappling with different forms of insecurity, “it appears peace is gradually eluding the Nigerian state”.

The obas said, “There is no iota of doubt to postulate that Nigeria is currently battling its worst level of insecurity. Nigeria has never had it this bad since the Civil War which ended in 1970. Although we cannot but commend the efforts of President Muhammadu Buhari towards curbing this menace of insecurity which has pervaded all sections of the country, we believe that a lot must be done by President Muhammadu Buhari to put an end to the issue of insecurity that is currently shaking the very foundation and corporate existence of Nigeria.

“Hardly can one safely postulate that there is any region in Nigeria today that is safe. The security of lives and property is one of the core responsibilities of the government and the government must do everything possible in this regard.

“We commend the giant step taken by the South-West governors to put in place a security outfit, Amotekun, which has undoubtedly assisted a great deal in curbing insecurity that we have been experiencing in the South-West. It is irrefutable today that the fear of Amotekun is now the beginning of wisdom for marauders, kidnappers, armed robbers and bandits in the South-West. This is highly commendable.”

Meanwhile, the Coalition of Northern Groups (CNG) on Tuesday, July 6 responded to the issues raised by the Southern Governors Forum during their Monday, July 5 meeting in Lagos.

The CNG was specifically referring to one of the resolutions of the forum asking security agencies to get clearance from state governors before embarking on any mission in their domain.

The northern group was also making a veiled reference to secessionists in the south like Mazi Nnamdi Kanu who is currently in government custody and Sunday Igboho who was recently declared wanted by the authorities. 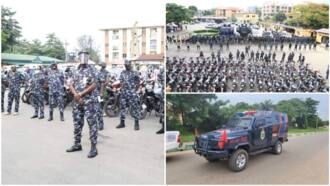 Human rights lawyer, Chief Femi Falana (SAN), says there is no law that supports citizens to be arrested in the dead of the night. Falana made the comment in reaction to the raid on the house of popular Yoruba activist, Sunday Adeyemo.

He stressed that the raid is a dangerous legacy of military dictatorship in Nigeria, adding that the secret police must be civilised in its engagement.

The Senior Advocate of Nigeria went on to note that the controversies surrounding the raid would have been unnecessary if the DSS had behaved like a modern agency.

In a related development, DSS declared the self-acclaimed activist wanted. This was made known by the DSS on Thursday night, July 1, at a press briefing in Abuja.

It was gathered that Nigeria’s secret police confirmed gunning down two of Igboho’s allies while the rest were subdued and arrested.

While noting that Igboho is presently on the run, Afunanya advised the activist to turn himself in as the government will definitely track him.