Italy are the new European champions following their 3-2 victory on penalties over England at Wembley Stadium.

Gianluigi Donnarumma saved Bukayo Saka and Jadon Sancho’s kicks to help the Azzurri win the silverware after playing a 1-1 draw after 120 minutes.

Manchester United left-back Luke Shaw opened the scoring for the Three Lions with a thunderous shot from close range after connecting with Kieran Trippier’s stunning cross.

The early goal unsettled the Azzurri as Gareth Southgate’s men gained momentum to ask more questions from the Italians.

England made more attacking runs in the early minutes of the encounter but they were wasteful with their final balls in spite of their opponents still finding their foot in the game.

Raheem Sterling came close to adding to his side’s tally towards the end of the opening half but he was booked for offside.

John Stones also made attempts but his header went slightly above goal as the proceeding headed towards halftime. 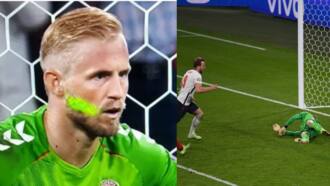 Leonardo Bonucci leveled parity for the Italians in the 67th minute after tapping in from close range with Marco Verratti responsible for the assist.

The goal changed the texture of the game as the English team that was defending their early effort came out to fight for the ball.

However, neither could produce any more goals despite the game stretching into the extra 30 minutes of fierce rivalry between both sides.

Italy made a last-minute effort at goal but the danger cleared off by England who appeared to have settled for shootouts due to the substitutions they made.