As people still continue to reminisce on the life and times of the late founder of SCOAN prophet TB Joshua, a throwback video capturing some interesting moments during his ministerations has emerged.

The old video compilation which was shared on Facebook by Irine Bara had some hilarious moments of the late prophet as well.

Princess reveals Sound Sultan followed up on Baba Ijesha saga despite being on sickbed, shares chat

A notable scene in one of the video was the moment a male testifier accused the propeht of ‘setting people free.”

An allegation TB Joshua had responded to hilariously.

But in an unexpected twist, the accuser attempted to engage the prophet in a fight. Amused, TB Joshua beckoned on the man to proceed.

But while the man charged at him, he swiftly backed the man and jokingly warned him to stay off. A warning the man heeding to the amusement of the congregation.

“I may not have been ur supporter while u are alive but I know you were a great man whose impact in the lives of others remain indelible.Rip.”

“A life well spent on earth. Daddy TB I can’t stop watching you. You are a true man of God. RIP The General of the Generals.”

“I will always say tb was an example of Jesus when am praying I see him like one of Christ Apostle in physical world rest in the Lord Daddy.”

“Amen, my prayer is we Christians should love one another as we love ourselves. With this we will build a big Christian family.

“From the clergymen and women that’s all leaders in God’s vineyard to the unborn babies. We need to change, to change the world almost everywhere in the offices, markets etc is Christian. So when we love one another the world will be full of peace. Let love lead.”

“TB Joshua lived his life making people happy by all means no doubt about that…. and for that alone he was a very good man. Rest on Prophet TB Joshua.” 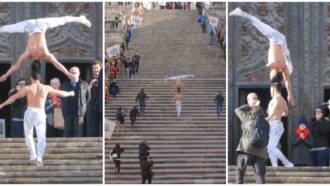 Man climbs 90 staircases with a person balanced upside down on his head in incredible video, stuns many people

Meanwhile, Legit.ng previously reported about throwback photos that speak volumes of the generous and humble acts of late TB Joshua.

In one of the snaps, the humble prophet carried three bags of food on his head, sweating in his shirt. Another has him giving out foodstuff in abundance to people who needed it.

In a photograph, he took it upon himself to keep the church clean as he got to work wiping the chairs of dirt and dust.

Tributes and praises of the SCOAN prophet have continued to pour in across social media platforms days after his burial ceremony.