More than 100,000 fans are now said to have signed a petition calling on the European Football governing body to call for replay of the 2020 EURo final between England and Italy.

These aggrieved fans are of the views that the referee in charge of the EURO 2020 final was biased with the intention of wanting Italy to win the encounter.

England went into this battle with the hopes of them ending their 55 years without trophy and they started the tie impressively netting the first goal. 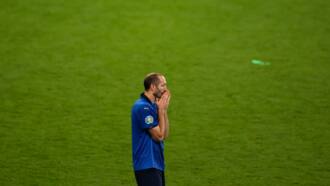 Luke Shaw who plays for Manchester United put England ahead with the fans thinking that their players would score more goals in the encounter.

However, Bonucci restored parity for Italy in the 67th minute and the 90 minutes of the match ended 1-1 before proceeding into penalties.

In the penalty shootouts, the trio of Marcus Rashford, Jadon Sancho and Bukayo Saka lost their penalties for Italy to win the game.

According to the report on Sportsbible, referee Bjorn Kuipers was accused of being biased by fans who want a replay of the encounter.

Italian players have delivered the EURO 2020 title to their president and the whole nation are currently celebrating being the champions of Europe.

Earlier, Legit.ng had reported how Giorgio Chiellini was hailed by former Chelsea and Manchester United coach Jose Mourinho who was impressed with his tackle against Bukayo Saka in the EURO 2020 final. 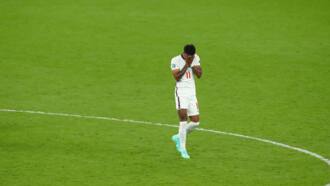 The Juventus captain and his teammates in the Italian national team came from a goal down to draw England 1-1 in the EURO 2020 final before going on to win on penalties after extra time.

But before the conclusion of the extra time, Bukayo Saka was making a nice run towards the Italian box before Giorgio Chiellini pulled the Arsenal man down.

Harry Kane and his teammates in the England national team protested as the referee ended up giving Giorgio Chiellini a yellow card for the tackle.

According to the report on tribal football, Jose Mourinho who worked as a pundit for the EURO 2020 stated clearly that the Italian players played their game well in the final.