When you are looking for a billionaire who commands great style, then you might want to think about Tony Elumelu.

The UBA boss’ Instagram page is never a bore as the platform serves as where he posts most about his social life.

You would never catch him ‘unfresh’. He makes one loves corporate life so easily with the way he wears his suits.

In this report, Legit.ng will be looking at five times, the billionaires dished out good fashion presence.

Some days ago during his visit to Abuja, the Nigerian man posted a video that showed him coming down from a private jet.

Despite having his suit hung over his shoulders, the class still shone with in his well-tailored trousers and well-built physique. 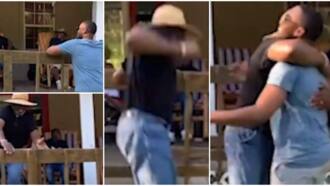 2. A black shirt and joggers did the magic

During an afternoon in London, the billionaire posed in a street in the UK with a black car in the background. With a bag worn across his chest, he looks cool in a jogger, shirt, and canvas.

3. He does it again with the suit

The billionaire posed on a white spiral-shaped staircase as he posed with a radiant smile. The hundreds of reactions the post got show that people loved it.

4. Another casual wear with much class

Perhaps what makes every wear a ‘banger’ on Elumelu is that he dedicates much time to working out.

In this photo, he has his white shirt rolled at his elbow. His pseduo-faded blue crazy jean complements well.

5. Full sportswear is a goal

Aboard a private jet, Tony Elumelu ‘slayed’ in his black tracksuit with matching tennis shoes. There are arguably not many Nigerian billionaires with such relative class as him. 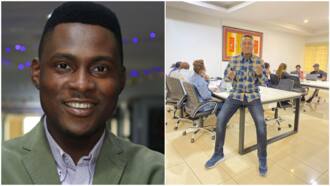 Meanwhile, Legit.ng earlier reported that Elumelu went on his LinkedIn page to share how luck played a great role in making him great in life.

On Monday, July 5, the rich man said the job he applied for when he started his career was well above his qualifications.

He revealed that despite not meeting the criteria for the job, he still sent in his application letter. He said it was by a dent of luck that the boss read his letter.