This is coming less than 24 hours after an audio was released via El Confidencial as Perez branded Iker Casillas and Raul Gonzalez as ‘biggest frauds’.

In the latest audio, the club president was heard calling Cristiano Ronaldo ‘an idi*t’ as he further branded the striker as a ‘sick man’. The audio which was said to have been recorded in 2012 has now gone viral to become the topic of discussion across the Spanish capital.

The club boss was quoted as saying via Yahoo News:

“He’s cr*zy. This guy is an idi*t, a sick man. You think this guy is normal, but he’s not normal, otherwise, he wouldn’t do all the things he does.”

Ronaldo left Premier League club Manchester United to join Real Madrid in 2009 and was at the Bernabeu until 2018 where he wrapped up with 451 goals in 438 games.

Although Mourinho who was in charge at the club between 2010 and 2013 earlier claimed that Perez loves him’ they later had a fallout before the tactician was shown the exit door.

Perez was also quoted as saying: 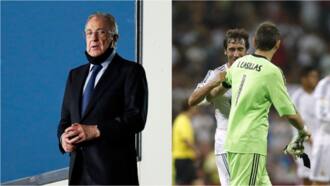 “These are guys with a terrible ego, both spoiled, the coach and him, and they don’t see reality. Mourinho is an idi*t. It is not that he does not want to play.

“Well, he’s a bit abnormal. He drives without a license. That said, he has been overwhelmed by the pressure.”

The 35-year-old has signed a two-year-contract with the French giants and delivered a brilliant response aimed at his former club.

Ramos saw off his contract with the La Liga side last month after spending 16 trophy-laden years at the Spanish capital.

Several clubs has jostled for his signature including Premier League sides Manchester United and Chelsea, but he has officially joined PSG.