Ikeja, Lagos – The Lagos state commissioner of police, Hakeem Odumosu, has said that more suspects have been arrested in connection with the murder of the late owner of Super TV, Usifo Ataga.

The Nation reports that the commissioner of police disclosed this during a briefing and parade of over 1,000 suspects at the command headquarters in Ikeja, on Wednesday, July 14.

Legit.ng gathered that although he didn’t give details on the number of suspects arrested and their connection to the murder, Odumosu said the case was progressing and the police would never compromise on it.

He reminded the public that the prime suspect, Chidinma Ojokwu, 21, was still a suspect with her rights guaranteed by the constitution, dismissing insinuations the police were attempting to give her a soft landing. 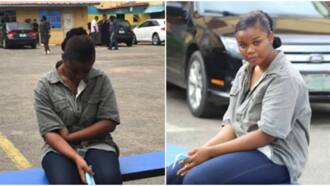 “We have established a case of conspiracy in the murder and we have arrested more suspects.”

Ataga was killed on June 15, at a shortlet apartment where he was spending weekend with his lover, Ojokwu.

Ojokwu, who earlier confessed to have stabbed the deceased to death before stealing his belongings, later refuted her statement claiming she returned from an errand to find him lying in a pool of his blood.

The Punch also reports that Ataga, whose wife and children reside in Abuja, was first reported missing by concerned friends and family after all efforts to reach him proved abortive.

The officers of the Lagos state police command later found Ataga’s lifeless body in a flat in Lekki Phase 1, Lagos with multiple wounds on June 16.

It was reported that the Lagos state police command while reacting to the video on Monday, July 12, dismissed the claim, urging the general public to disregard the video.

Ojukwu in the video said she did not kill Ataga as she earlier claimed when she was paraded by the police.

According to the report, Ojukwu, who is in detention released an eight-minute video, well dressed and polished, as she recanted all she said earlier when she alleged she stabbed Ataga to death.

The spokesperson of Lagos state police command, Muyiwa Adejobi, said the interview was an old one and should be dismissed.

He said whatever was said in the video would not change the facts the police had gathered on Ojukwu as the prime suspect in the murder of Ataga.