The Cristiano Ronaldo and Lionel Messi’s G.O.A.T. debate has been judged from the angle of winning trophies for their respective nations, Give Me Sport.

Ronaldo helped Portugal lift their first-ever European Championships in 2016 while Messi was on the winning side of Argentina’s Copa America triumph.

CR7 and Messi in the past have been criticized by footballing greats not to have achieved anything for the respective countries but that question has been answered within the last six years. 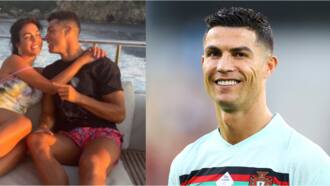 Ronaldo gets emotional, professes undying love to partner Georgina Rodriguez while on holiday

The pair have won 11 Ballon d’Or awards in the last 12 years between them and they are still going on strong to add another accolade to their trophy shelves.

Ronaldo made seven appearances at the Euro 2016 hosted by France and scored three goals to help the Selecao beat Les Bleus in the finals.

The 36-year-old’s minutes per goal ratio was one strike netted in every 208 minutes, he provided two assists en route to winning the title.

The Juventus striker’s average performance per game was 7.34 while he created three big chances in the process but failed to score from a set-piece.

On the other hand, Messi had a brilliant individual and team tournament after helping his side win Copa America.

Out of the seven matches played, the 34-year-old emerged topscorer with five goals including two free-kicks and finished the tournament with the most assists (5).

The Argentine captain’s average rating per game was 8.30 where he created five big chances and missed two of them.

Meanwhile, Legit.ng had earlier reported that Lionel Messi’s Copa America win for Argentina is the most trophy needed for the 33-year-old, according to teammate Sergio Aguero, Barca Blaugranes.

The Albiceleste won their first Copa since 1993 and it was Messi’s first for his native country after they were twice denied by Chile in the final.

The six-Ballon d’Or winner has been criticized by many having won many trophies for Barcelona and individual accolades.