Don Hernan who is a 100-year-old Argentine football fan known for registering Lionel Messi’s goal in old school ways has been saluted by the six-time Ballon d’Or winner who was impressed.

Lionel Messi is currently in joyous momentum having won the 2021 Copa America with Argentina in which him and teammates defeated Brazil in the final of the tournament.

According to the report on Sportsbible, Don Hernan has been recording all goals scored by Lionel Messi since the Argentine started his professional football career. The report added that Don also used to call his grandson to help him with the scoreline of any Barcelona game he did not watch so as to know if Messi scores or not.

The man has a paper where he writes down all the goals scored by Lionel Messi and he is keeping it safely in his house.

Lionel Messi however thanked the man for the efforts he has put in place for years in following his games at Spanish side Barcelona and Argentina national team.

“Hello Hernan. Your story reached me.

“It seems crazy to me that you have been recording my goals and in that way, and that is why I wanted to send you a big hug and thank you for what you do, for all your follow-up work.”

Earlier, Legit.ng had reported how following a bomb threat at the Rosario airport in Argentina, Lionel Messi’s private jet has been delayed as the superstar set to return to Spain. 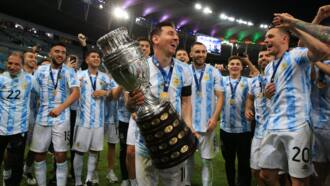 This is coming days after the Argentina captain inspired La Albiceleste to Copa America glory at the just concluded tournament in Brazil.

Messi was billed to return to Spain where he is expected to spend his summer holidays, but he was left stranded back home in Argentina.

It was gathered that barely hours before the superstar’s scheduled take off, man claimed to have a bomb in his suitcase.

The situation forced security operatives to activate emergency protocols as they suspended all flights and immediately evacuated the facility.