Ruben Dias has been named the number one centre-back in the world right now according to new rankings powered by WhoScored and cited in .

Manchester City had lavished cash on the club’s defence since 2016 when Pep Guardiola arrived at the Etihad Stadium, but the back problem was solved when Dias arrived last season and he has been regarded as the best via Squawka.

The 26-year-old has been rock-solid for the Citizens, bringing in the kind of effect Virgil van Dijk had on Jurgen Klopp’s Liverpool in 2018 as his composure helped power his team to the title. He won the Writers’ Association and Premier League Player of the Season award in his first season in English football.

Second on the list is Brazilian star and PSG defender Marquinhos who has been brilliant in the last couple of seasons.

His technical ability and agility ensure he stands out even on a team of galacticos like Mbappe, Verrati and Neymar.

An elegant defender with a Brazilian’s comfort on the ball, the PSG captain scored three times in both Ligue 1 and the Champions League and netted for Brazil in the first game of their Copa America campaign, where they conceded just two goals on the way to the final.

Top 10 centre-backs in the world 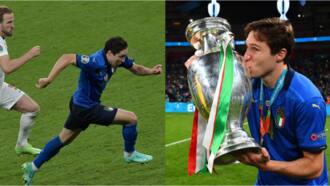 Ramos, 35, was heavily linked with the French giants for weeks and it was only a matter of time before an official announcement was made.

PSG announced their new signing on their website as they stated Ramos had signed a deal to stay with the club until 2023.

The 22-year-old recently inspired the Azzurri to European Championship glory following their 3-2 triumph on penalties at Wembley Stadium.

He finalised his deal with the Parisians today having already undergone medicals during this summer’s European competition.