Images of Brazilian star Willian playing for Arsenal against Hibernian in pre-season friendly has been making waves on social media with the Gunners fans not pleased with his physique.

Even opposing supporters have used the opportunity to ridiculed Arsenal as Mikel Arteta and his wards went on to lose the match 2-1 against the Scottish club.

Willian joined Arsenal from Chelsea on a free transfer, and much was expected from the Brazilian last season at the Emirates stadium, but he scored only one goal in 37 games for the North London side. 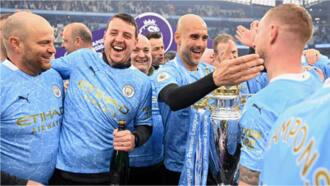 Last term in the Premier League, Arsenal also failed to win any title and were unable to get a ticket to play in Europe in the coming season.

According to the report on Sportsbible and GMS, Willian’s physique was of great surprise to most football fans, Mikel Arteta’s Arsenal were also surprisingly beaten by Scottish side Hibernian.

A horrendous error by Arsenal goalkeeper Arthur Okonkwo lead to the opening goal for Hibernian which was added to in the 69th minute.

Emile Smith pulled a goal back for Arsenal in the friendly encounter, but the Gunners failed to avoid defeat in the encounter.

Earlier, Legit.ng had reported how Premier League side Arsenal submitted bid to sign French midfielder and talks are now going on between the Gunners’ chiefs and Lyon eggheads for a transfer.

At the 2020/21 Premier League season, Arsenal failed to win any title and were also unable to finish among the top six on the final standings. 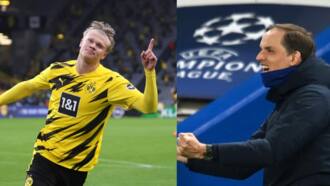 Arsenal fans were angry with the club’s inability to pick Champions League or Europa ticket, and the Emirates chiefs are now ready to help Mikel Arteta with fresh legs this summer.

Houssem Aouar has been absent in Lyon’s pre-season training in attempt for him to force a move out of the club.

The 23-year-old earns a wage of £64,000 per week and the France international has two years remaining on his current deal which is set to expire in the summer of 2023.

As things stand presently, Arsenal chiefs will have to be proactive in their discussion with Lyon chiefs as the likes of Paris Saint-Germain and Atletico Madrid are also interested in Houssem.