The Kano Pillars forward secretly tied the knot with Mariam in a private ceremony somewhere in the country last weekend. He shared his picture on his official Instagram page.

This is however the third time the former Premier League star will be getting married in nine years but he parted with his first wife in 2017. 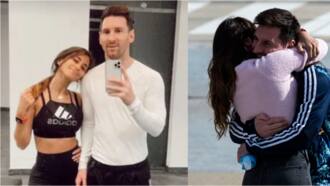 The same year he wedded Juliet Ejue, who has been the only woman in his house until a few days back when the Nigeria international doubled his blessings.

Musa returned to the Nigeria Professional Football League earlier this year after failing to seal a move back to the Premier League in January.

He was linked with a move to a few clubs in the English topflight but West Bromwich Albion were more serious only for the deal to collapse on the transfer deadline day.

The 28-year-old forward parted ways with his Saudi Arabia-based side Al Nassr last October in search of a more competitive league but that didn’t materialise.

He will however hope to try again this summer with a number of top European clubs looking for players to sign before the 2021-22 season kicks off next month. 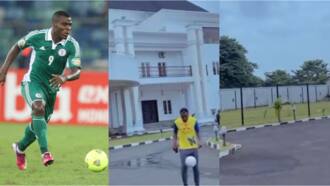 Legit.ng earlier reported that Ahmed Musa who is the captain of the Super Eagles of Nigeria has shared an adorable photo of himself and his wife Juliet Ejue to celebrate their wedding anniversary.

The former Leicester City forward and his dear wife Juliet Ejue have been together since 2017 living happily and they have also been blessed with two kids.

According to the awesome photo Ahmed Musa posted on his Instagram page, the Nigerian super footballer thanked his creator for the chance to have Juliet as his wife.