An unusual theory on the material used to make beds for athletes participating in the Tokyo Olympics has emerged.

It was claimed earlier in the week that this year’s edition of the Summer Games will see Olympic participants sleep on flimsy cardboard beds, allegedly to discourage intimacy among the competitors.

The beds, it was claimed, are made in such a way they will break at little provocation, and as such, each bed will be occupied by only a solitary individual.

Incidentally, photos of the cardboard beds were first shared on social media by the participants themselves, with some, bizarrely, asserting the unusual bed frames are meant to prevent them from having close contact. 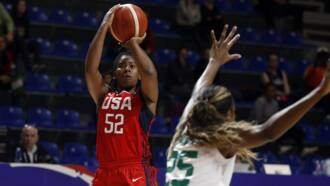 “Beds to be installed in Tokyo Olympic Village will be made of cardboard, this is aimed at avoiding intimacy among athletes,” Chelimo tweeted.

“Beds will be able to withstand the weight of a single person to avoid situations beyond sports,” Chelimo cracked.

However, Irish gymnast Rhys McClenghan has since come out to debunk the claims, labeling them as “fake news.”

McClenaghan filmed himself bouncing on his cardboard bed to disprove the rumours.

Earlier, Legit.ng had reported how Nigerian female basketball team known as the D’Tigress on Sunday night, July 18, suffered a defeat against the United States who won 93-62 in both teams’ final pre-Olympics friendly game.

Before facing the D’Tigress of Nigeria, the Americans had lost their first two exhibition games and they needed to give themselves little bit of confidence before heading to Tokyo. The American ladies attacked the D’Tigress from the start of the match until the end as they played like the encounter was a final of a major tournament.

They held D’Tigress to just 30.6 per cent shooting while they shot 53.8 per cent overall. They also outscored Nigeria in all four quarters of the game, though only by one point in the third quarter.

Nigerian team did not make a good run in the second half as they allowed the Americans to overcome them.