A Muslim cleric in Kaduna,Sheikh Ibrahim Asadus-Sunnah, has advised Nigerians to dedicate themselves to prayers rather than persistent complaints over the predicaments of the country.

Asadus-Sunnah, who led the Eid-el-Kabir prayers at the Tudun Wada Bashama LEA praying ground in Kaduna metropolis, said with intensified prayers for the country and leaders, the situation might change for better.

He said prayers would put leaders on the proper path and guide them in the discharge of their responsibilities. 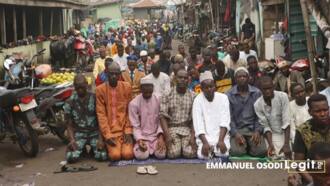 “I sincerely believe that this nation will overcome its numerous socio-economic and security challenges that have created overwhelming poverty today.

“I also believe that with prayers and commitment on the part of government and the people, the challenges of killings, kidnappings, and banditry, will be surmounted.

According to him, Eid-el-Kabir teaches and reminds Muslims of the meaning of sacrifice, love and the significance of cordial relationship with others.

“The significance of the celebration today is rooted in peaceful co-existence, mutual respect and tolerance.

“These are the virtues that we, as Nigerians, need to imbibe, as we seek to heal our country of all shades of mistrust,” he added.

Meanwhile, Muslims in Nigeria have joined their counterparts across the world to celebrate the 2021 Eid-el-Kabir.

In Ogun state, worshippers attended prayers marking the Muslim festival of sacrifice outside Kara Mosque at the Kara livestock market along Lagos-Ibadan express road. It appears the prayers were not observed with strict adherence to the COVID-19 protocols as Muslim faithful were spotted together with any spacing. They were also seen without masks on.

Eid-El-Adha also referred to as the festival of sacrifice, is celebrated worldwide by Muslims. It is marked with the slaughtering of rams, cows, and sheep.

One of the photos that were taken by Legit.ng’s Osodi Emmanuel showed the moment some worshippers slaught*red their ram

President Muhammadu Buhari is in his hometown, Daura, Katsina state where he joined his kinsmen to observe the Muslim Eid-el-Kabir prayers on Tuesday, July 20.

The Chief Imam of the town, Alhaji Safiyanu Yusuf, led the prayers that was held at the Kofar Arewa Prayer ground. 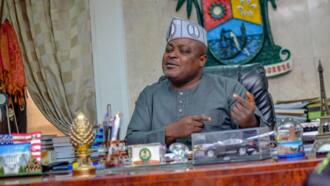 A video shared by Aso Rock Villa on Facebook showed President Buhari trekking back home after participating in the prayers.

He was dressed in a sky blue flowing robe (Babariga) with heavy security surrounding him, and was seen hailing the crowd lining the sides of the road.