A young man has left netizens impressed with an incredible story of how he became a huge business owner from selling shoes on the streets.

Mark Jnr Jere from Zambia shared a story on Facebook with photos of him showing where it all started and where he has got to. 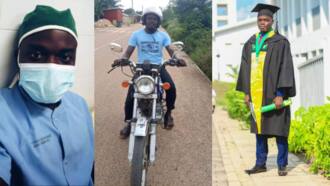 From the photos, a young Mark could be seen seated on the street selling official footwear while seated on a stool.

The graduate from Evelyn Hone College also shared photos showing his three clothing stores that are beautiful to watch.

The young man went from selling official wear to casual and smart outfits cutting across every design.

In his caption, Mark said it took him nine years to get to where he is, and it was all hard work, nothing extraordinary.

Many went on his comment section to congratulate him, with others saying they were inspired.

Here are a few:

“Keep up the good work.”

“Keep up the good work. Congratulations. I’m happy for you my friend.”

Legit.ng previously reported that a 25-year-old Nigerian lady identified as Olamide Ipadeola explained how working in a restaurant while schooling earned her N500,000 on her first job after putting the skills learnt to practice.

The young entrepreneur, who is the owner of square_events.ng, said working at the restaurant was the only available opportunity for her to be able to save money for school fees and feeding.