It appears Nollywood actress Tonto Dikeh has a strong liking for crossdressers as she is now showing support for James Brown in the wake of her fall-out with ex-bestie, Bobrisky.

Just recently, Brown shared a video from the sickbed on his Instagram page while urging members of the online community to pray for him. 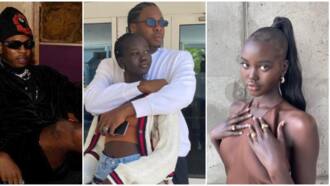 The effeminate celebrity also noted that people should celebrate him now that he’s still alive. His post read:

“Celebrate and Appreciate Me now that am alive … Still recovering Pray for Princess of Africa.”

Interestingly, Nollywood’s Tonto Dikeh was among those spotted in the comment section with comforting words for the young man.

Tonto prayed for him to get well soon while asking the crossdresser to also send his mobile contact to her. The actress didn’t fail to let Brown know that she is a huge fan.

“GET WELL SOON HONEY..Send me your no. If that’s ok with you.. Imma huge FAN.”

In a twist of event, social media users who came across Tonto’s comment couldn’t help but make reference to her ex-bestie, Bobrisky.

Sanwo-Olu cracks guests up as he sings with Timaya at event, says ‘I don’t want to die o’

“Ahhh bob go mad when shim see this one”

“Looks like tonto what’s to get back at bob.”

“Bob is coming for una.”

“Wait! Is this some sort of rebound ? I wish she would stay off these supposed crossdressers.”

Bobrisky had taken to his page to share distasteful details about his former friend as he claimed Tonto owed him N5 million.

This led to Igwe wondering what loyalty means between friends as she wondered why they spill each other’s secrets once things go bad.