An emotional video has captured the moment Flight Lieutenant Abayomi Dairo who survived bandits attack on a NAF Alpha Jet aircraft was escorted to meet his superiors.

It was a moment of celebration for Flt Lt Dairo and other officers as the enemy didn’t succeed in making the military mourn.

In the video that was taken at the NAF Base in Kaduna on Monday, July 19, and shared on Facebook by Ayo Ojeniyi, the gallant officer was escorted out of a chopper to meet his superiors who were happy to have him back. 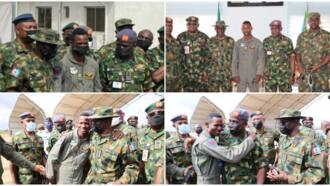 Other military officers could be seen hailing Flt Lt Dairo and chanting the Aggressor, which is his nickname.

The heartwarming video shows that the military officers are united in one cause: to defeat the enemy.

“Congratulations, all thanks to God Almighty, we would have been in another mourning mood now!!”

“May Almighty Allah bless him and those that have sacrificed for the nation.The war against banditary should take another dimension. PMB is trying, our military and every aspect of our nation life has been crippled with inefficiency due to corruption.”

“I rejoice with him. He would have been dead by now but thank God . may continue to protect our gallant soldiers in line of their duty.” 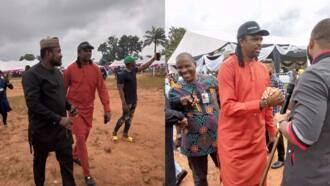 Legit.ng early reported that the Nigerian Air Force (NAF) confirmed that Nigerian military plane, an Alpha jet, crashed after returning from an operation.

The director of public relations and information of NAF, Air Commodore Edward Gabkwet, said the crash did not occur in Kaduna as reports claimed.

According to NAF, one of its aircraft crashed while returning from a successful air interdiction mission in Zamfara state.