Nigerian singer Davido is fully back to the social scene as the father of three has got Nigerians talking like he used to do.

Davido’s colleague, Patoranking, shared a video on his page showing the moment the Assurance crooner surprised a couple on their wedding day.

In the video, Patoranking was serenading the couple who was on the dance floor. Soon, a signal was made to Davido to come on stage.

With a mic in his hands, the assurance crooner joined the dance floor and as soon as the bride saw him, she couldn’t believe her eyes.

According to Patoranking, he brought Davido whom he referred to as his brother to surprise the groom and his bride on their wedding day.

Watch the cute video below:

“You can pay for school but you can’t buy class.”

“Omo the place scatter. what a surprise‼️” 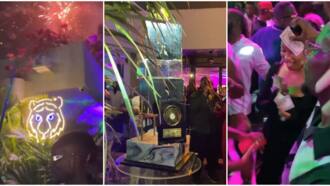 The singers showed up at the event and even though many may have assumed that they were just going to be regular guests, they proved otherwise.

The two treated guests in attendance to an energetic performance. A clip making the rounds online captured Davido performing as the audience sang along with him.

Social media observers who were not physically present at the funeral ceremony had different things to say.