Speaker of the House of Representatives, Femi Gbajabiamila, on Thursday, July 22, led some members of the lower chamber to pay Sallah homage to President Muhammadu Buhari.

Zamfara political leaders also on the entourage were led by Governor Bello Matawalle.

Earlier, Buhari really proved that he was a former military leader as he trekked to his house in Daura, Katsina state, after the Eid-el-Kabir prayers.

A video that captured moments when the Nigerian leader went back home on foot was shared by one of his media aides, Bashir Ahmad, on Facebook. 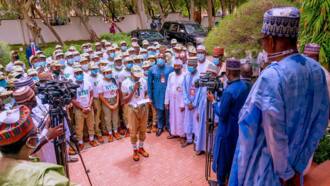 Eid-el-Kabir: Celebration of the century as Buhari donates N1m, cows, rice to NYSC members in Katsina

While President Buhari walked majestically, he was greeted by a cheering crowd of villagers in Daura on Tuesday afternoon, July 20.

Meanwhile, there was joy and celebration among members of the National Youth Service Corps (NYSC) in Daura, Katsina state, on Tuesday, July 20, over the philanthropic gestures of President Buhari.

In the spirit of festivity, President Buhari gifted the corps members and NYSC officials N1 million, two cows, and 20 bags of rice.

Disclosing the president’s show of kindness in a statement, the spokesman of the service in Katsina, Alex Obemeata, said the gifts came when a delegation visited him at his private residence.