The actor shared a video showing the moment he placed a plate of rice and stew and a bundle of money before his daughter. 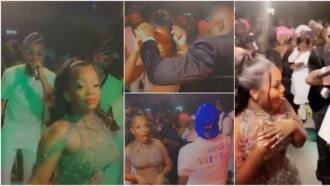 Actor Apama and his daughter

The comic actor then instructed his baby girl to choose one. Although Audrey’s eyes never left the new notes of money, she seemed a bit shy to go for it.

After a little push from her dad, the girl picked the new notes of money, to the surprise of the actor. According to Apama, the bundle of money is N50k.

In the caption that accompanied the video, the actor said he has seen the love of money in Audrey. He jokingly noted that he doesn’t have the same blood as her as he doesn’t love money too much.

Watch the hilarious video below:

“She no want your food na.”

“She come this life to eat rice??”

“She didn’t even look at the rice one bit. my gender.” 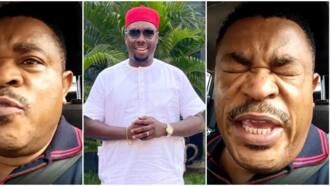 Obi Cubana: Actor Victor Osuagwu laments, says late mum has been disturbing him to do reburial for her

“She can go to d restaurant 4 better fried rice and enjoy the remaining money.”

“The way she started eyeing it sef says it all.”

Legit.ng earlier reported that the singer dedicated a sweet post to his first daughter on her birthday.

The proud dad dedicated a special post to the birthday girl on his official Instagram page in which he noted how proud she has made him over the years.

Davido also expressed his love for Imade while hinting that there would be a big party to mark the new age.