Tokyo Olympic Games will have no spectators at the venues owing to strict coronavirus regulations.

However, that may not be the only reason fans would be kept away from the stadia following the invasion of a wild bear at the Fukushima softball venue which hosted the first sports event of the Tokyo Games.

But the animal got away after the facility managers with the help of some other staff members tried to tackle it – yet, it is still on the loose. 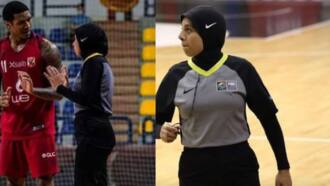 Tokyo’s local media identified the animal as an Asian black bear, with the Sports Hochi daily saying the entire contingent of Olympic guards assigned to the venue spent a whole night searching the hairy creature.

The guards even blasted music and set off firecrackers in an effort to flush out the bear in vain.

What was said about the bear

The incident was confirmed by a Fukushima police spokesman who said the bear was spotted on Tuesday, July 20, night, and then again on Wednesday morning, barely hours before the opening pitch in a match pitting hosts Japan against Australia. The spokesman told AFP:

“A guard found a bear inside Azuma Sports Park early in the morning yesterday. We also received similar information this morning.” Legit.ng earlier reported that Egyptian woman, Sara Gamal, is set to make history as the first hijab-wearing Muslim and African woman to work as a basketball referee during the Tokyo 2021 Olympics.

Gamal, a civil engineer in Egypt, will also make history as the first Arab woman to officiate a 3×3 basketball match that will be making its debut in Tokyo.

While being interviewed with The BBC, the referee said she has been getting feedback from many female referees in Egypt who keep thanking her for giving them hope that their dreams are valid.