An 89-year-old man, Derlin Newey, never knew life would turn around from him so quickly. The man became a pizza delivery man as a way to pay his bill.

Woman remembers waiter who paid for her food when she forgot money at home, surprises him with N13.1m

What separates the man from other delivery men was the way he always relates with his customer with a smile and says:

“Hello! Are you looking for some pizza?”

One of his customers, Carlos Valdez, got so used to him that he always requested his service. Each time the man came to his house, he would record him with a security door camera.

When he posted the video on TikTok, many people were amazed by it all and wondered why he was doing such a job at a very old age.

When Derin saw the money people had raised for him, he got so emotional and began crying with a shaky voice.

“This couldn’t have gone any better,” said Carlos. “He needed this. I’m just glad we could help him. We just need to treat people with kindness and respect the way he does. He stole our hearts.” 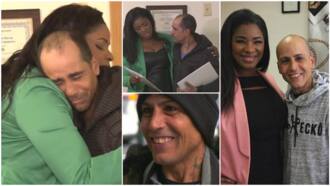 Watch the amazing video below:

Below are some of the reactions:

“Are you guys still taking donations for him? The holidays are just around the corner I’m sure he could use a little extra money in his pockets! If not for gifts then for gas and heating or something.”

“This is so amazing.”

“That was one of the most incredible things that I have seen in the past few days. Thank you for that. Hugs from Brazil, God bless you!”

“You guys are awesome!”

Meanwhile, Legit.ng earlier reported that a young woman, Brittany Reed, found herself in a situation where she could not pay for her meal because she had left her wallet at home.

The woman planned to pass by McDonald’s to get food for her children and had ordered when she could not find her wallet.

With an embarrassed face, she looked at the teenager, Wyatt Jones, that was attending to her and told him that she is sorry she would have to cancel.