FCT, Abuja – Femi Adesina, a presidential spokesman, says some Nigerians would have mocked the Muhammadu Buhari-led government if Flight Lieutenant Abayomi Dairo had been killed after his jet was shot down by bandits in Zamfara.

Dairo, who has been hailed for his gallantry, was able to exit the aircraft and ingeniously deploy his parachute which saved his life and he was able to escape from the bandits on Sunday, July 19.

Adesina’s statement is contained in an article titled ‘May God Bless Our Troops’ and published on his verified Facebook page on Thursday, July 22. 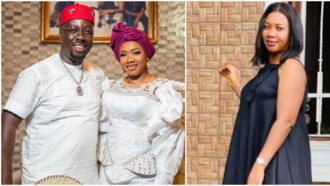 The presidential aide added that the bandits would have recorded the killing of the military man and put it on social media.

“Imagine what could have happened if the evil guys got him. They would have killed him worse than you do to a snake, butchering and dismembering him. And they would have recorded it, and put it on social media.

“Evil hearts would then start sharing it, deriving a pernicious joy in it all, thinking it was the Buhari administration they were undoing. Really? No, they would only be betraying their lack of humanity, and avowing their loyalty to the devil, that father of all liars and wicked souls.”

Nigerians should be grateful to the military

Adesina said Nigerians must forever remain grateful to the military for keeping the nation safe from bandits, kidnappers, secessionists, cultists and murderers.

He argued that it was unfortunate that some Nigerians insult soldiers for failing to eliminate Boko Haram. Adesina expressed optimism that peace would return to the country soon.

“Is Buhari the first to be insulted? Can you compare the insults you guys poured on Jonathan to what Buhari is receiving today? You can’t sow cocoyam and reap cassava!”

“And this is a sad truth,some people even go as far as praying and hoping for something bad to happen in nigeria so as to blame and insult buhari…really sad though.”

“There are statement leaders don’t uttered, I wonder the type of leaders we have, always try to say what will cause unnecessary argument between the citizen when we have serious issue disturbing the country. May Allah help us.”

“Would they have rather insulted me? The last I checked, it is Buhari who was voted in 2019 by same some people to protect lives and properties of Nigerians. 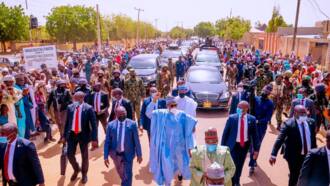 “When Buhari and his government fail to do so, as it were today; should he not be blame? I know you are just struggling to do your work.”

“So you think it is the wisdom of this government that saved the pilot? It is the training he has long acquired in professional training and the help of God Almighty that he escaped.”

Meanwhile, President Buhari has expressed concern about the lingering banditry in the northwest.

The president in his Daura country home, Katsina state, on Thursday, July 22, described the situation as most disturbing and a source of concern to him because the bandits and their victims belong to the same tribe and religion.

Speaking while hosting 12 governors and some federal lawmakers, Buhari said the lingering development in the northwest is the most amazing to him.