A mother of 10 kids from Kakamega county has disclosed that her husband has refused to embrace family planning and, instead, has made it his goal to have 22 children.

The 30-year-old mother, identified as Gentrix Wekesa from Navakholo village, is expecting her 11th child, and she said her husband refused to use any contraceptive methods due to traditions. Instead of enjoying her pension, retired nurse uses it to feed hungry neighbours monthly

While appearing on TV 47, the anxious mum said:

“I give birth to these children every year. As soon as I start getting my menstruation, I get another child. My youngest is yet to be a year old.”

Wekesa, the sole breadwinner of the family, says she is overwhelmed by the burden of taking care of the children.

“It got to a point one of the kids dropped out of school at Class Seven because they kept sending him back home because of school fees or uniform, and I did not know what to do. The second-born, too, has dropped out of school. So I took him somewhere to help someone graze his animals, and when he gets paid, he helps me take care of the other kids.”

Her husband, Anthony Wekesa, has also forbidden her from using any contraceptive methods.

According to him, these are foreign concepts and having a few kids only makes one a laughing stock. 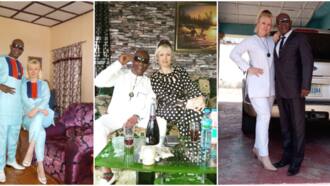 Oyinbo lady quits stay in US after 10 years as she moves to Nigeria with husband, both work in same company

She once tried getting a contraceptive, and when she got home, her husband got violent and took her back to the hospital to remove it.

“As long as she gives me the number of children that I want. They should be 22 kids.”

Wekesa added that her husband wants more children so that they can help them in future.

A woman reaped the fruit of her labour

Meanwhile, Legit.ng earlier reported that a Nigerian man with the handle @FasipeTobi shared a very emotional story of how his mother made a big sacrifice to sponsor them in school.

In a post on Sunday, May 23, the young man said that he was really moved to tears while narrating how his mum sold hot tea and homemade yoghurt on Lagos street to fund her children’s education.

As if that was not enough, the superwoman also used proceeds from the business to take care of her ailing husband who was blind.