Kepa Arrizabalaga has finally tendered an apology for the incident that happened in 2019 while playing for Chelsea in the final of the Carabao Cup against champions Manchester City.

When then Chelsea coach Maurizio Sarri saw that the encounter was going into penalties at the Wembley stadium, he ordered for goalkeeper Kepa to be substituted in the final game.

But surprisingly, the 26-year-old Spaniard refused to leave the field despite Willy Caballero waiting on the touchline in which his refusal angered Maurizio Sarri.

Sarri took his anger to the tunnel before his assistant Zola talked to him and he returned to the bench in what was an heartbreaking moment for him. 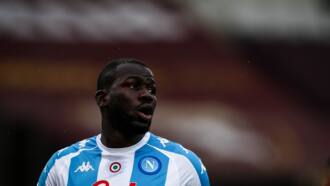 Interestingly, Chelsea teammates even begged Kepa Arrizabalaga to go off, but he refused to listen to any of them in the Carabao Cup final.

Kepa Arrizabalaga however failed to help Chelsea in the penalty shootouts as Manchester City went on to win the big encounter which made the Blues fans livid.

According to the report on UK Sun, the Spanish goalie explained that he regretted not to have agreed to leave the field adding that Sarri actually misunderstood him.

“I was wrong, and I am sorry for everyone who was involved: for Maurizio Sarri, who it seemed like I had undermined in public.

”For Willy, a team-mate and a great professional, and for all my team-mates and Chelsea fans who had to put up with everything, all the noise that was generated during the game and then in the days after.”

Last season, Kepa lost his first choice position at Chelsea to Senegalese goalie Mendy who helped the Blues to win the Champions League. 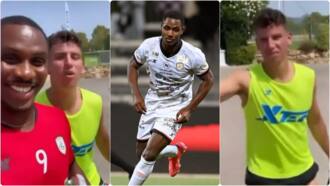 Earlier, Legit.ng had reported how Senegalese goalkeeper Edouard Mendy was teased by his teammate at Chelsea Hakim Ziyech who jokingly claimed that the super saver has eaten too much during the summer break.

The Stamford Bridge boys are back at Cobham where they will start preparation for the coming Premier League season having failed to win the title last term.

But some players who played for their nations at the EURO 2020 will be given more days to rest before joining their teammates in pre-season training.

Last season, Chelsea were superb under Thomas Tuchel as they won the Champions League beating fellow English club Manchester City in the final.