Traveling by air using a private jet is a known luxury that not so many people can afford. This explains why Bisola Aiyeola has made a big deal following her first time.

First time on a private jet

The reality star and Nollywood actress left many people cracking up after she documented her time on the private jet, a video which she shared on her Instagram page. 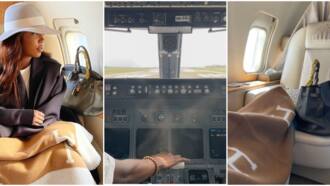 The video which has since gone viral captures the actress from the time she gets on the jet, her reaction while on the jet, and when she eventually gets off.

Her excitement is visible and almost contagious. However, it is her hilarious voice-over that has got people amused. At the end of the clip, the actress can be heard saying:

“Money is goof in this life.”

“Hello Dears, I can throwback on a Monday abi? I just want to alert you my familiaaaaaa that Finalllyyy I have enter private Jet ooo and I constituted all manner of Nuisancery available . I no go lie,Easy life sweet die chai. Shalla to Temple 01 the Plug .” 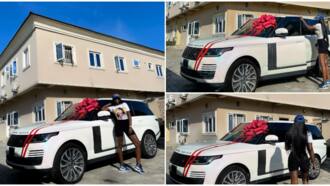 Check out some comments below:

“Baby come and spend cash on me my best babe “

Bisola Aiyeola, took it upon herself to put ex-presidential aide, Reno Omokri in his place.

The controversial Omokri had earlier said that apart from those who were assaulted or are widowed, he doesn’t pity baby mamas one bit.

In a reply to him as sighted by Legit.ng on Instagram, Bisola who is a single mum of one herself noted that Omokri was just giving himself a headache over the matter.