Popular actress, Tonto Dikeh, is a mum of one and she recently told the world how intentional she is about raising her son, King.

Taking to her Instagram page, Tonto revealed that she would never fail in her duties as a mother to her son. 21-year-old Jennifer Ehizojie opens up on being a dark-skinned model, overcoming bullying

Tonto disclosed that just like many strong women, she learnt on the job and she is too intentional about her style of parenting for her son to turn out poor.

She affirmed that there is no manual to being the best mum and then went on to list qualities expected of a mother.

The actress advised women to take motherhood as a partnership between them and God.

She finished off by saying she wants to make the world a better place and she is raising a son that people’s daughters will be safe with.

“Motherhood is one Area I can’t fail. I Will never fail. I am intentional about it. Just like so many of you strong warriors, I learnt on the Job. There is no Manual to being the best MUM. JUST BE Present, Patient, Loving, not Toxic, intentional ,and most especially knowing that THIS “MOTHERHOOD “ is a PARTNERSHIP between you and GOD.” 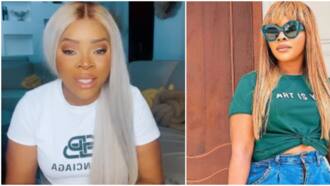 A lot of people took to Tonto’s page to agree with her as well as share their opinions.

Read some comments sighted below:

“Same here and I’m so jealous for who that lucky Girl would be.”

“I can’t wait to be a mother and also raise kids that will be in the society as well. Parenting is God’s grace.”

“Definitely. So help us God. Amen.”

“You are doing an awesome job. Your so inspiring. Your loyal fan.”

Tonto had a lot to be grateful for as she witnessed the graduation ceremony of her son, Andre.

A video on social media captured the moment Tonto was joined by her lover, Prince Kpokpogri, on the stage after Andre was called to receive his certificate.

As expected, the video stirred mixed reactions from members of the online community with some people praising Tonto’s man for playing a fatherly role in her son’s life.