Insecure actress and executive producer Issa Rae is officially off the market. The beautiful actress said I Do to her longtime lover Louise Diame in a private ceremony in France attended by close friends and family.

The 36-year-old actress shared photos of the beautiful ceremony via her Instagram page, leaving many surprised.

Issa has for the longest kept her relationship very private, and her fans only guessed who she may be in a relationship with. “An impromptu photoshoot in a custom @verawang dress. My girls came to help me, but they all coincidentally had on the same dress! They were so embarrassed. Then I took a few flicks with somebody’s husband.

Here are some of the comments from the post:

“You’re always stunning, but that picture of you with that lady’s husband has the most glow. Congrats!”

“Issa, why do you have to play all the time? Gorgeous, congratulations.”

“Congratulations! This caption is so you and so everything! Here’s to a lifetime of love and happiness.”

“Wishing you all the joy anyone can muster in a human heart.” 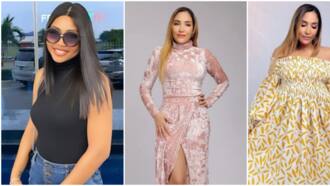 “Congratulations, you look so beautiful, wishing you a lifetime of happiness.”

The Little actress, Issa Rae, was featured on Legit.ng after signing a deal worth N15 billion to produce new films for Warner Media.

Her company Hoorae media label will produce content that will be aired on HBO and Warner Bros. brands, exclusively.

The deal will be for five years and puts Rae amongst the best earners in content creation.