A Nigerian man, Kingsley Ezeanyika, said that he lost three members of his family in one year, including his dad.

On Sunday, July 25, he said that they had the burial of one of his sisters. In addition to that, he revealed 2021 was the year he made his biggest mistakes.

He had a memory loss 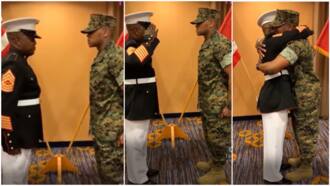 Emotional moment father cries as he salutes his son who just became a US soldier, video stirs reactions

Reliving the challenges he has had in past years on his birthday in a LinkedIn post, the man said that just after the close of the first session in school, he fell off his hostel’s flyover, had a head injury, and lost his memory.

Kingsley said that he stayed back in school to read for his ATS 2 exam and had barely just confirmed his 4.58 CGPA as a first year student when it happened.

He stated that it was only by God’s grace that he graduated and became a chartered accountant. He said without Him, he would have been nothing.

Kingsley’s story touched the hearts of many as people thronged his comment section with messages of congratulations.

“Wow! I don’t know you but, Happy Birthday Anniversary Kingsley! Lemme borrow you my favourite personal quote, “Circumstances and situations can only try, but I am made of more!”. Cheers to more years of standing strong on your feet, irrespective. Cheers!” “Happy birthday to you Kingsley. God has indeed done so much for you and there’s need to be grateful for life. So sorry for your losses. I wish you the best bro.”

“Happy birthday to you Kingsley. God has indeed done so much for you and there’s need to be grateful for life. So sorry for your losses. I wish you the best bro.”

Meanwhile, Legit.ng earlier reported that a young Nigerian man, Onoriode Reginald Aziza, celebrated the accumulation of academic successes he achieved in his life.

In a post on Monday, March 15, the man said he has successfully completed his academic journey after defending his PhD.

That was not just all, Reginald revealed he bagged a first-class in law from Obafemi Awolowo University, Ile Ife.