Ronaldinho who was one of the best attacking midfielders in the world during his active playing time has explained that he is waiting for Lionel Messi to sign a new deal at Barcelona.

For now, Lionel Messi’s future at Barcelona remains unresolved even though there are reports that the Argentine has agreed a new deal, but the Catalans are yet to announce it.

Barcelona are currently having some financial problems which is the main reason they have not sorted out the future of their highest goalscorer ever in history. 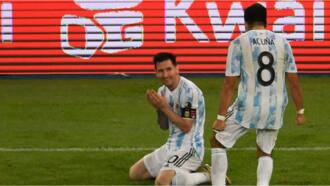 After the end of last season, Lionel Messi was linked with a move to Premier League side Manchester City and French giants Paris Saint-Germain even though these two teams did not make official bid.

Lionel Messi then went ahead to play for Argentina at the 2021 Copa America where he won the title thanks to goal from Angel Di Maria which gave them win over Brazil.

According to the report on Marca, Ronaldinho who played with Lionel Messi at Barcelona wants his former teammate to remain at the Camp Nou.

”Messi has to stay at Barcelona.

“When he retires, which I hope is a long time from now, he can leave his No.10 behind and nobody will play with it again.”

Earlier, Legit.ng had reported how Barcelona are billed to host Juventus in an exhibition clash next month and now the Catalan giants are making efforts to seal and announce Lionel Messi’s contract. 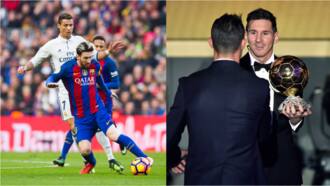 Barcelona who are cash strapped are trying to sell fringe players and will now do everything to complete Messi’s contract extension by the first week in August.

And pressure is mounting to get the deal done before their friendly with Cristiano Ronaldo’s Juventus on August 8.