Preparations for the marriage of Yusuf, son of President Muhammadu Buhari, to the daughter of the Emir of Bichi, Princess Zahra Ado-Bayero, on August 20, 2021, have been completed.

Bichi Kingdom spokesman Lurwanu Malikawa, in a statement on Saturday, said the Emir of Bichi, Alhaji Nasir Ado-Bayero, had inaugurated a 145-member committee to facilitate the wedding without any problems. According to the statement, Bagwai District Commissioner Nura Ahmad (Madaki Bichi) will chair the committee, with Abba Waziri (Falakin Bichi) as its secretary.

While inaugurating the committee, the king, who was represented by Madakin Bichi, instructed its members to use their experience to ensure the success of the wedding.

Date of engagement and coronation date

According to the statement, the committee will also organize the coronation of the Emir of Bichi, as well as the coronation and the presentation of staff of office by Kano State Governor, Abdullahi Ganduje.

The announcement also said that the wedding will be held on August 20 and the appointment is scheduled for August 21 at the Emir of Bichi palace.

Yusuf reportedly met Zahra in the UK, where they are studying for a bachelor’s degree, Punch reported. 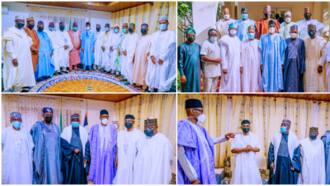 Yusuf Buhari has been turbaned the Talban Daura, a top traditional position in Daura Emirate of Katsina state.

He shared a photo of himself, Yusuf, and Musa Daura, which had the caption: