Aso Rock, Abuja – Godwin Obaseki, the governor of Edo state, has ruled out plans to abandon the Peoples Democratic Party (PDP) and return to the All Progressives Congress (APC).

The Edo state governor who secured his second term mandate on the PDP’s platform after failing to get the APC’s ticket said his integrity would not allow him to abandon the party which provided him cover when he was in distress. 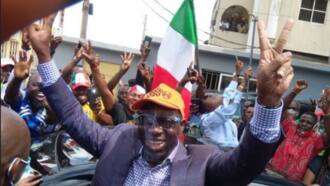 If you don’t want me to lead, leave PDP for me, Obaseki warns

The Nation reported that Governor Obaseki said this when addressing newsmen after a meeting with President Muhammadu Buhari at the Presidential Villa, Abuja, on Wednesday, October 13.

The governor also said he did not leave the ruling party of his own volition but was forced out, adding that he would not have been re-elected if not for the PDP.

Do you have a groundbreaking story you would like us to publish? Please reach us through info@corp.legit.ng!

“I think I’ve shown that I’m a politician with integrity and I have made it very clear that I didn’t leave the other party on my own, I was pushed out of the party, and someone else gave me cover, gave me an opportunity.

“It will not be the right thing to do to now leave who helped you, who gave you the umbrella in your storm, and then go back to the person who pushed you out.”

Speaking on the lingering internal crisis in the Edo state chapter of the PDP, Governor Obaseki said as a party that was in opposition for 12 years, it would take a while to develop an understanding among new and old members.

“You have to understand that this is politics. My current party was in opposition for 12 years and this is the first time the party is being in government.

“So, it will take a while for everybody to come together to have an understanding of the new role and the new position we occupy.”

He admitted that there are “some internal crises” in the PDP chapter but said significant progress has been made to address them.

The Edo governor also expressed optimism that the crises will be resolved before the party’s forthcoming convention.

In a related development, Edo state deputy governor, Philip Shaibu, has denied having any rift with his principal, Governor Obaseki. While featuring as a guest on Channels Television’s Politics Today on Monday, September 13, he denied any disagreement between him and the governor and restated his unalloyed loyalty to Obaseki.

However, the deputy governor, who said there are issues to be resolved in the PDP, did not categorically state whether he would leave the party or not.