Big Brother Naija Shine Ya Eye star, Pere has been pleasantly surprised by his supportive fans days after the show came to an end.

It is not uncommon for fans to spoil their faves with gifts seeing as some of his mates have even received their fair share of the love.

The actor’s fans showed uo at his hotel bearing gifts of different shapes and sizes with their excitement over the roof. 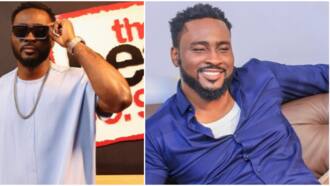 Our general is rich: Reactions as Pere confirms he spent over N4m to get his teeth done

There was also a band that serenaded him with a song as some of his colleagues and fans urged him to dance.

Parts of the items presented to the reality star included a huge money cake, a bouquet of dollar bills, and more foreign currency in a box.

He was also given photo frames, hampers and other gifts.

“Our general deserves it.”

“It’s how these housemates support each other for me(whether genuinely or not).”

“The most hated by housemates but loved by the outside world. Top 3 that no one saw coming. The General himself. Pere.”

“My General! Patriots love you.”

“My General and President Of Patriots.” Liquorose and Emmanuel’s fans surprise them with N2m each, tickets to Rome and other gifts, Nigerians react

Pere agreed that he was cool with Maria when they were both wildcards and he tendered an apology to her over unpleasant things he said about her afterwards.

The actor also spoke about how he was able to build a formidable relationship with Cross and Whitemoney.