Saskay conducted the session on her Instagram story where she gave fans free access to ask her questions.

“I want to know who I am I want people to know this is Saskay and this is what she stands for! #KnowSaskay What do you wanna know? ask away.” 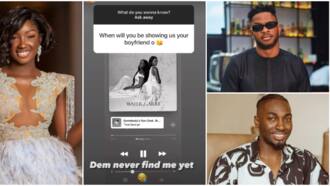 Somebody’s son hasn’t found me yet: BBNaija’s Saskay says as she friendzones Cross and Jaypaul

In one of the questions posed at her, a fan asked about her proposed Central Intelligence Agency (CIA) plans:

:Are you still interested in the CIA thing? What’s your timeline? since you also want to do modeling, biz, etc.”

“I’m very well interested in International security studies, I can start my master’s next year.

Entertainment is short term plan (5-10years) I wouldn’t want to waste my talents and big brother has given me the avenue to explore that area so I’m gonna do just that while I plan for a future with CIA.”

See a screenshot of Saskay’s interaction with fans below

Legit.ng earlier reported that Saskay got a huge surprise from her unidentified female fans who gave her one of the tallest money tower gifts filled with cash and 30 beautiful boxes that contained expensive gifts. Saskay regarded the fans as her sisters who have shown genuine love for her over the years. She flaunted the new gift during one of her Instagram live sessions and blushed as she unwrapped the lovely gift boxes one after the other.

Other fans of Saskay said she deserved much more and promised her more surprises.