The celebrity funny man who is also a music artiste has now signed a record deal with an international company.

Taking to his verified Instagram page, the excited Basketmouth posted a video and photos of himself with men who appeared to be his business partners in the signing of the deal.

The comedian didn’t stop there, he took to his caption to confirm that he had indeed been signed on to an international record label called Empire. 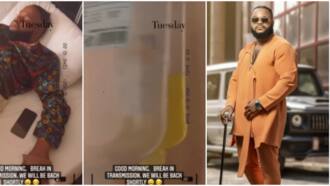 Do you have a groundbreaking story you would like us to publish? Please reach us through info@corp.legit.ng!

“Hey guys, did I mention that I’ve been signed by @empire? Well…I am.”

See the video below:

Soon after the comedian shared the good news, some of his colleagues in the industry and numerous fans took to social media to congratulate him.

Legit.ng has gathered some reactions below:

Basketmouth opens up about music journey, says he is a failed rapper

The comic star started off by delving into the story behind his journey into the Nigerian entertainment industry. Basketmouth noted that he is a failed rapper as he surprisingly narrated how he had tried his hands on rap music at the start of his career.

He explained that at the time he was blending the ‘Fela’ kind of music with hip-hop. Basketmouth added that the blend was way ahead of his time as people weren’t entirely receptive.

According to him, the failure to do something new led him to embrace comedy because it was much more comfortable for him.