A lady as celebrated on social media recently bagging a new role in the United States Marine Corps.

Kerry Hogan from Virginia, US was promoted to the rank of lieutenant colonel on Saturday, October 9.

In a celebratory LinkedIn post, Kerry said she was promoted to the new rank by her mother who was retired from the same force where she served for a period of 22 years. 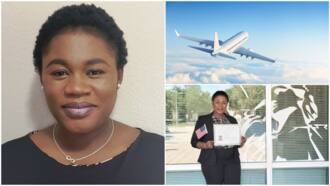 Dressed in the military outfit, Kerry is seen standing at ease (an order given to a group of soldiers to stand with their feet apart and their hands behind their backs) before her mother, in one of the snaps.

In another picture, both mother and daughter hug after Kerry had done the salutation.

“Congratulations on your new rank of Lt. Col. I happened to see your post and I just had to comment on it, especially since about 20 minutes ago I read a FB post that my nephew Jim posted and he just got selected for the rank of ….you guessed it…Lt. Col., but he is in the USAF. Congrats again and I am also very proud of you and thank you for your service!”

“Congratulations, Kerry Hogan. This is a tremendous day for you and what a special promotion ceremony with your Mother presiding! “I was promoted to LtCol outside the Marine Corps museum too. My grandfather was a Marine and fought in the battle of Tarawa. He had passed just shy of a year before my promotion, but him and I share a brick on one of the paths outside the museum with our names and info on it – “we” did the promotion right there.

“Great achievement. You must be so proud of your mum and your mum must be so proud of you. Personally I am a Swiss National living in the UK. My son grew up in the UK. Being an expatriate, he did the Swiss National Service on a voluntary basis. Proud mum talking here. Did him really good, he matured during service. A shame that the UK doesn’t have national service anymore, would do the youngsters a lot of good.” 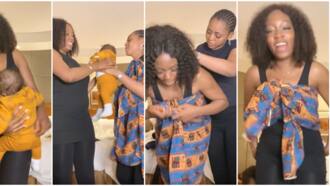 I learn so much from you: BBNaija’s Kaffy gushes as Regina Daniels teaches her how to back her baby in London

Woman decorates daughter who got promoted in the Nigerian Police Force

Meanwhile, Legit.ng previously reported that a Nigerian mum had decorated her first daughter who got promoted in the Nigerian Police Force

The lady who was said to have long received a promotion in the Nigerian Police Force got to share the achievement with her mum by giving her the honour of doing the rank decoration.

The lady who shared the post on Facebook, Lynda Asulimen, gushed about the moment and tried to imagine the joy in the hearts of both the mother and daughter.